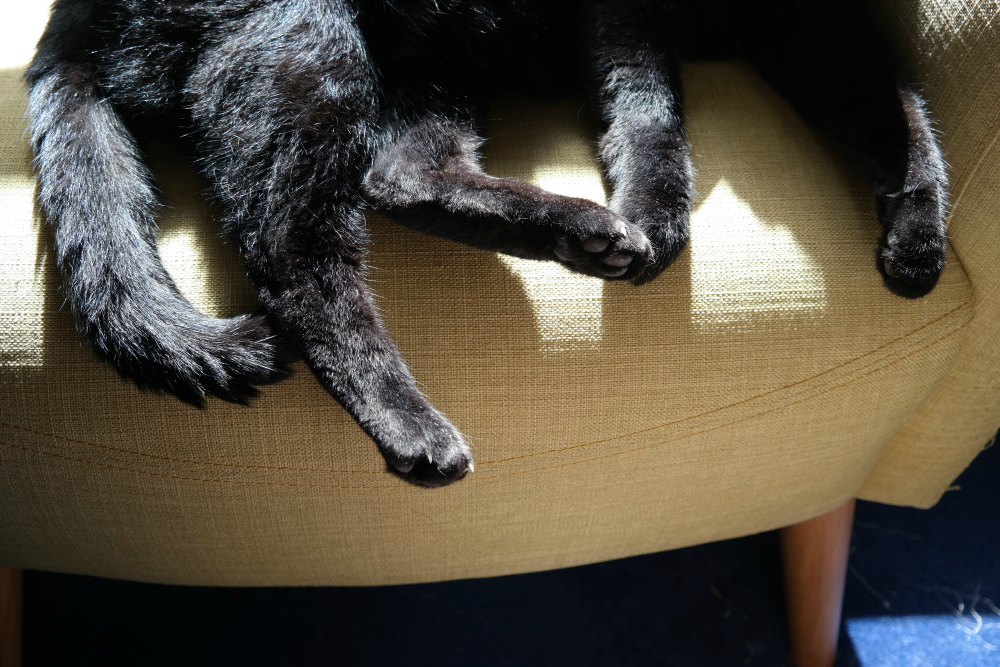 Last week, I had to rush Gizmo to the vet's because he couldn't pee.

He couldn't pee, it turned out, because he has spent too much time lying next to the radiator and too little time consuming water. A lifestyle of which I am in no position to judge.

I feel the poor cat's pain, though - I've had cystitis and it was horrible. But, bless the NHS, at least it didn't cost me £736.

Anyway, we don't currently know whether or not the insurance is going to pay out, but please do keep your fingers (legs?) crossed that they do. Because I'd quite like my family to eat this year.

In the meantime, Gizmo and Polly have launched a whole new turf war because he has been off on a big adventure which has filled him with courage and she has had two glorious days as an only cat which have filled her with a sense of entitlement.

As if that wasn't battle enough, Steve and I now have to spend roughly an hour a day chasing Gizmo around the flat, armed with a syringe and a pill popper (super-clever plastic contraption, not 1990s trance fan), before force feeding him something which looks like a capsule full of Wotsit powder. Gizmo is big and heavy and strong and in possession of claws; the whole thing feels like a particularly idiotic game of chicken.

The hassle of trying to get Gizmo to and from the vet's was a good reminder of how lucky I am to have excellent people in my life. Carrying a yowling, struggling, one stone cat in a plastic box on a bus on a snowy day whilst trying to push a buggy might have given me a funny story to tell but it would also have been unthinkably awful. Luckily, a neighbour babysat MM one day, a friend the next, Emma gave Gizmo and me multiple lifts, and Steve's parents fulfilled both roles on day three. Huge thanks go out to them all.

Obviously, there are two adult cat owners in the Rooftops household. Last time Gizmo baked himself to ill health, Steve worked from home and did the vet runs; this time, he had to be at work because he was expecting to hear whether or not he was being made redundant. Same the next day. And the next. And the next. And today. And tomorrow. And possibly next month. It's dragging on just a tad...

In happier news: I met Ruth and I don't want to get all gushy but I'm ever so glad I did. It turns out she lives just around the corner, too - hurrah!

MM and Ruth's older son, L., also hit it off. So much so that we barely saw them for two and a half hours.

Which segues nicely into the huge change I can see in MM and her friends after the Christmas break.

For one festive reason or another, we hadn't seen any of MM's toddler-aged friends since early December. A five week break. Which is probably another reason I was feeling so tired.

Anyway, over the past couple of weeks we've been meeting up with them again. And what a difference! Suddenly they're playing together. They're coming up with ideas together and building on them together and having fun together; it can take several hours for them to become tired and possessive and liable to shove each other off bits of furniture.

It's lovely because my kid is having such a good time!

And it's lovely because the grown ups can have a cup of tea and multiple biscuits and a proper conversation which lasts for several hours and includes the phrase "soon we'll be able to drop them at each other's houses for a morning (and have some time to ourselves)".

Not only that, but suddenly MM and Gizmo have bonded, too. Ever since he came home from the vet's, he's been letting her sit squashed right up against him, bury her fingers in his fur and rest her head on his belly. I can only assume that this new friendship is based on the fact that not one of the times she's chased him out of his safe places has resulted in him having a pill shoved down his throat.

Whatever the reasons, I have a loudly purring cat and a very happy little girl.

Those things are right in my world.
Email Post
Labels: cat life