Did That Lump of Plastic Just Bully My Child? 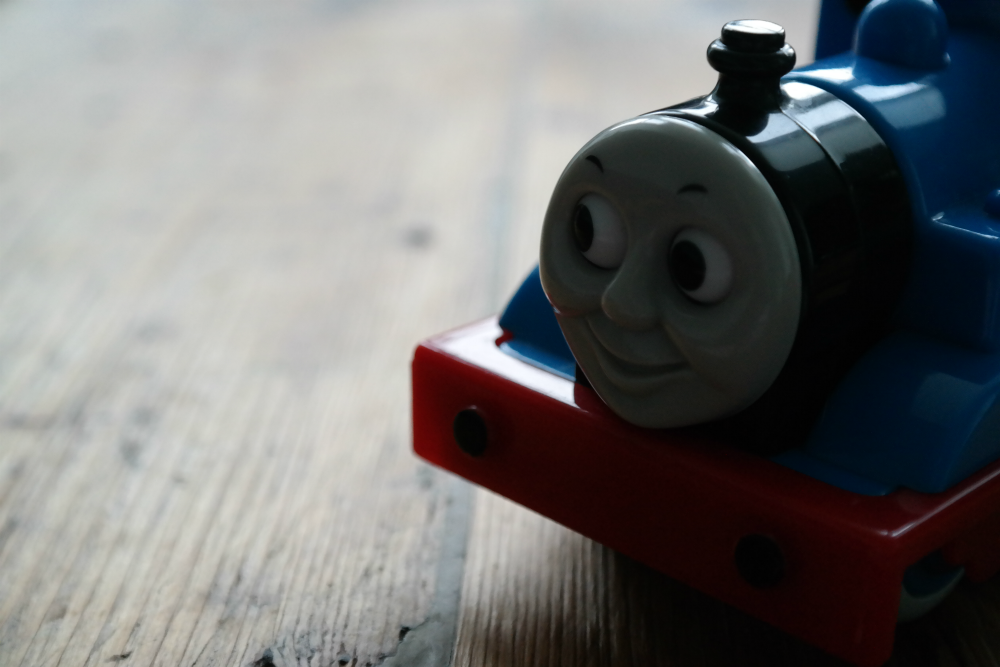 My child (and Steve and I, being the wielders of the debit cards) is very lucky: she gets a lot of hand-me-down toys from her cousins. Most of the time, they are great toys which the boys have genuinely outgrown (recent highlights include two Potato Heads and a Tombliboo); sometimes, they're noisy lumps of plastic which I suspect my sister simply can't stand to have in her house any more.

One of those noisy lumps of plastic is a Thomas train.

It looked harmless enough: a blue train with a smile on its face. When I was little, the tank engine and his friends were models of ambling amiability; I assumed that not much had changed.

But what an attitude it has.

I don't know if the speaker is faulty (perhaps my sister tried to drown it before sending it to Aberdeen?) but, when you press the button, it emits a gravelly, hissing, clunking noise like the engines of an underground city in a particularly dystopian TV show. Then it starts to bark its dogma at you:

"Blue is the only colour for the most hard-working engine."
"Number one always comes first."
"Wake up, lazy bones! Why don't you work as hard as me?" (asked in an accusatory rather than an encouraging tone)

Things turn a bit sinister after that: "I cleared my own landslide!" I assume the train engineered said landslide to smother a few red-wearing, lazy number fours.

MM got her hands on this train before I'd realised what an aggressively competitive toy it was. She stood, eyes fixed on - as far as I could tell - nothing, mindlessly pushing the train's button over and over and over again as it recited its doctrine. I could almost see the snarling ideas implanting in her brain. Number one does always come first. Blue is the colour of winners (throw out those yellow shoes immediately, Mummy!). I am a no-good, useless lazy bones; why don't I work as hard as this smug piece of plastic?

I used to think MM's other noisy toys were irritating with their pleas for cuddles and plans to "sing in the sea" (surely a bad idea for a battery-operated spinning top?), but at least none of them has ever told her she's a slacker if she dresses in red or orange or pink.

She already has enough six year old boys yelling at her that she's "not allowed" to climb the wrong way up the slide at the play park; she doesn't need her toys barking rules at her, too.

I don't know where this train gets off, dictating her chances of success and failure in life, but I'm getting off the Thomas train now - into the charity shop bag it goes.
Email Post
Labels: baby 0-18 months kid stuff parenting