On Accepting That My Teens are Trendy Again

Every so often, I see my teens come back into fashion.

I was an alternative kid in the 90s. I turned twelve in 1990, twenty-two in the year 2000. I was there, clad in my DMs, my plaid shirts, oversized T-shirts and babydoll dresses and toting my discman as it whirred and skipped its way through Siamese Dream.

The first time I noticed a nineties revival, I wailed, "I'm not old enough to be retro! And they're doing it wrong! Their lipstick's not smudged and their clothes fit them properly!"

But I've come to accept it now. I remember walking around Topshop sometime last year (whilst remembering walking around Top Shop in the late 90s when it was the place to go for suit jackets, pencil skirts and self-coloured T-shirts), marvelling because it was like being inside my adolescent wardrobe. There were the same washed-soft tartan babydoll dresses, the biker boots and, for heaven's sake, the exact same band T-shirts but crisp and clean and without any cracks in the logos.

But I didn't mind. I didn't mind that I was retro. Because at least it meant that kids these days had temporarily excellent taste.

(Yes, yes, I just used the phrase "kids these days"; I've long since accepted that I'm no longer one of the "young people".)

But recently something alarming occured to me.

It occured to me that, back in the 90s, I happily pillaged 70s fashions and styles. I wore maxi skirts and garish florals; I listened to Joni Mitchell on my dad's old record player and I read a lot about zen. The 70s were retro to me and I pictured them in a romanticised and slightly patronising way based on photos of my mum and her friends wearing headscarves; the 70s were all about babysitting circles in handmade dresses sitting around sunny gardens on stripy deckchairs. Everything was over-saturated and tinted orange.

The 70s had happened twenty years earlier and that made them The Good Old Days When People Were More Innocent.

Which, for the kids donning their plaid shirts and listening to Nirvana now, might make them The Good Old Days When People Were More Innocent. 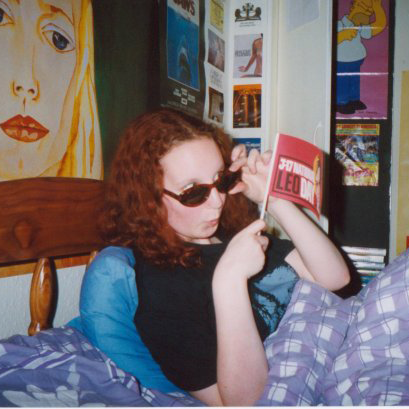 Those kids may picture my adolesence in a romanticised and slightly patronising way based on album sleeve photos of riot grrrls wearing velvet jackets; the 90s to them may be all about screenprinted flyers and Simpsons stickers and smoky clubs and furniture dragged up six flights of stairs from the skip. Everything may be bleached out and tinted blue.

And, while I can handle the fashions being retro, it unsettles me to realise that my formative years are, too. That the actions and lives and habits of my teens are sentimentally seen as quaint.

But what I think disturbed me most was the realisation that my own view of the 90s is seen through a pair of rose-tinted John Lennon glasses, too. It's long enough ago that none of the drama hurts or particularly embarrasses me any more; it's long enough ago that my social circle has almost entirely changed and when I run into people I knew back then I struggle to recognise them or to reconcile their careers and offspring with the unambitious stoners they used to be; it's long enough ago that I can talk about it in clichés (DMs; Siamese Dream; smoky clubs) without defensively listing the ways in which the stereotypes were not me.

So perhaps that's why it no longer bothers me each time my teens become trendy. Because they were long enough ago that they're not me any more; the fashions are a pastiche of another girl, another time in my life - they don't feel like a stylised twist on me.
Email Post
Labels: words