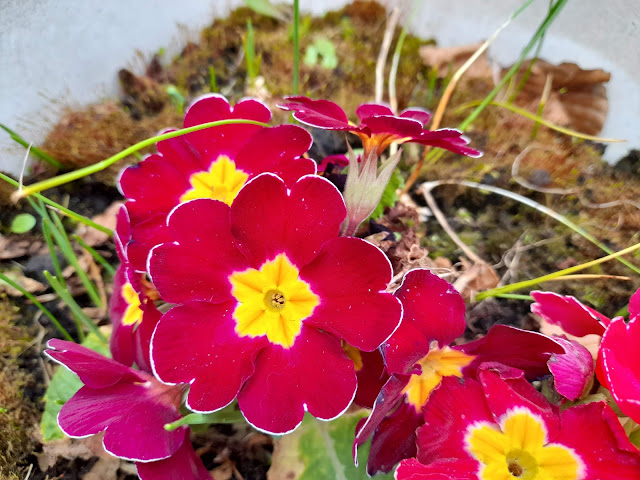 How was your March? Let me tell you the most exciting thing which happened in our March: we switched on the outdoor tap after the winter and the pipe burst; it cleaned our downstairs neighbours' window; their cat was surprised; a man called Ryan came and fixed it and strapped some sort of pipe specific ski jacket around it to stop it bursting again. Yeah. Beat that.

Actually, it was a pleasant sort of nothingy month. The kids (despite protestations) got to school and nursery on every morning they were supposed to and (despite exhaustion) made it home again afterwards. Steve kept working from home. I bleached some window seals and ate a lot of biscuits (two unrelated bits of activity).

5yo found a really good den in the local park so now I spend a lot of time standing next to a rhododendron bush. Sometimes I get to talk to another parent about covid vaccines while I'm there. So many people I know have had their vaccines already and I am jealous; I have never wanted to be sick or old before in my life, but here we are - strange times.

Our lovely downstairs neighbours are deserting us. They've only gone and bought themselves their own house. They claim it's for the benefit of their pets, but I fear we have driven them out. Anyway, I'm now in my usual state of "how bad will the new tenants be?" anxiety, and am spending a lot of time browsing property websites. This may or may not be related to the window seal bleaching spree mentioned above and to me painting over the no-longer-damp-but-still-orange patches on the dining room ceiling (we had the roof replaced seven years ago...).

What else? It was Mother's Day. The kids gave me chocolate and two books, only one of which Steve happens to want to read. 3yo was very insistent about which present I should open first. There were also many drawings, mostly of my children riding unicorns, but also some featuring me with the number 42 written above my head (the number 42 makes me automatically superior to the other parents in the playground who have numbers like 38 and 27 floating around above them - kids truly see each new age as some sort of merit award).

Anyway, that was March. April looks a bit more eventful because there will be a riot of chocolate this coming weekend, there's supposed to be snow (it always snows in April, Prince) and 5yo is turning six. There's some sort of loosening of lockdown rules but, honestly, I've lost track - tell me when my assorted family members can come to visit; until then, I'll just keep standing beside a rhododendron bush.

Do you have any plans?