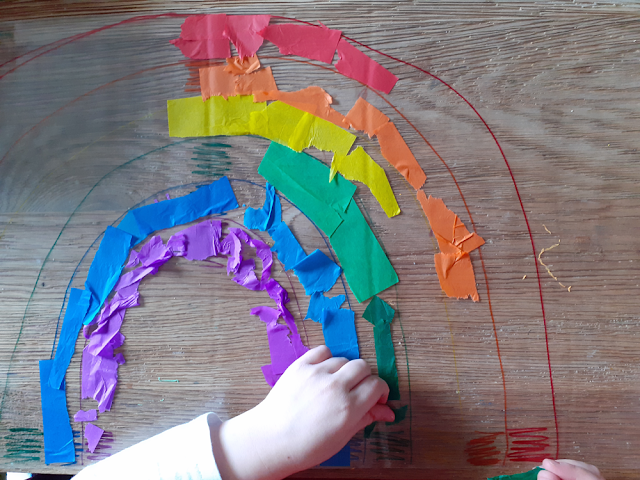 To think, at the start of March, life was still normal. We were still going to the eldest's gymnastics classes and the youngest's music classes and my mum was still catching the train up from her part of the country to our part of the country to do Play Doh with the kids. We met up with pals in a big park on 18th March - starting to question whether or not that was a good idea, but figuring the kids had already shared whatever germs they had with each other at nursery - and then, the next day, everything changed. 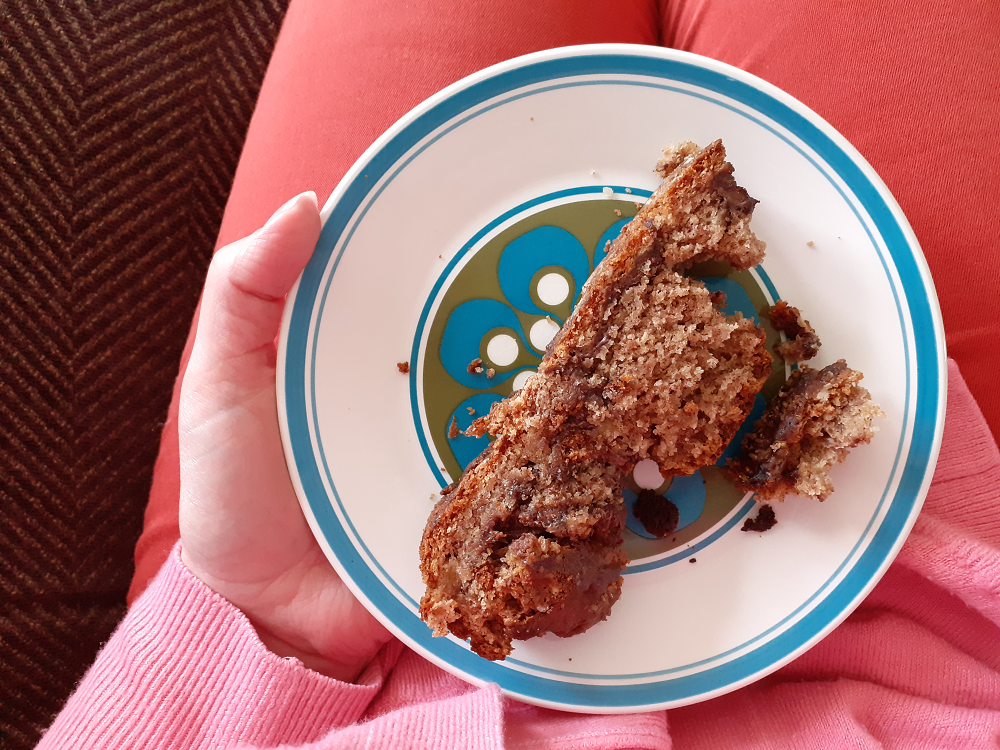 Since then, my four year old has become a five year old. Her party was already arranged, the bags of stickers and sweeties were already packed; she lay on the floor and grieved when we told her it was off. Then she made a plan to reschedule it for later in the summer and we still thought that was a plausible idea, so we agreed.
Her actual birthday was lovely. She had been excited for days. People dropped off gifts on the doorstep and tied balloons to the railing across the road. She played online games with her cousin and ate cake in the garden and was thoroughly spoiled with Playmobil. 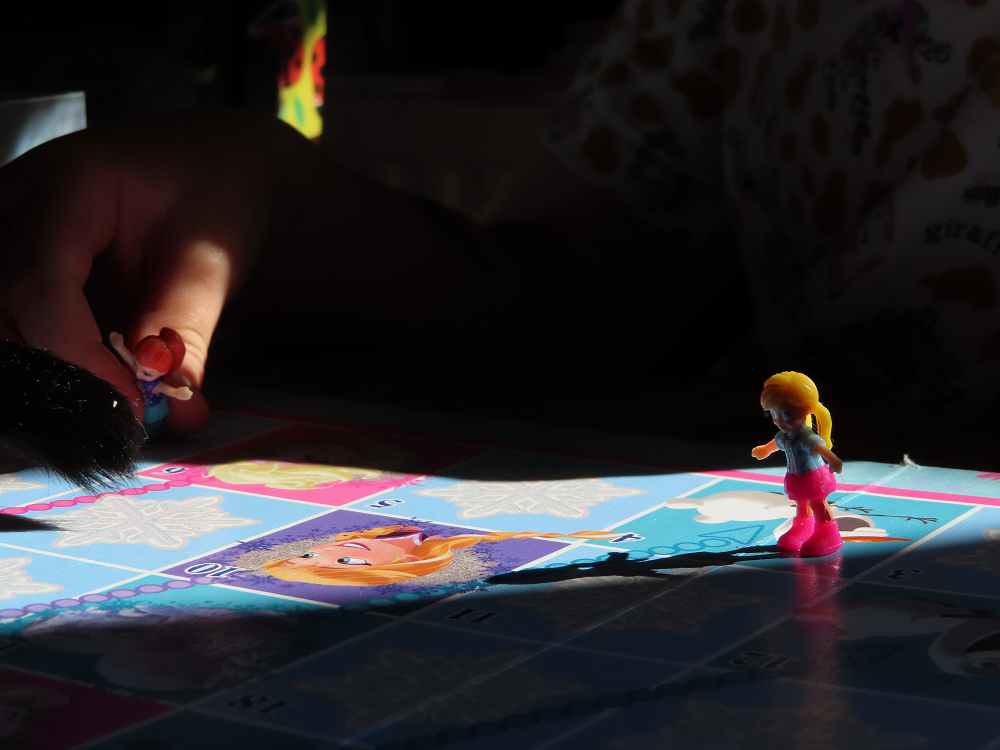 And then it was over and everybody's mood started to dip. We watch Santa check his pocket watch every morning, because Christmas is The Next Good Thing We Can Guarantee Is Going to Happen.
Some days it feels all bad (there's no end in sight; I don't want my child starting socially distanced school after the summer). Some days it feels all good (Steve is working from home; virtual safari parks are brilliant). Some days it's up and down. 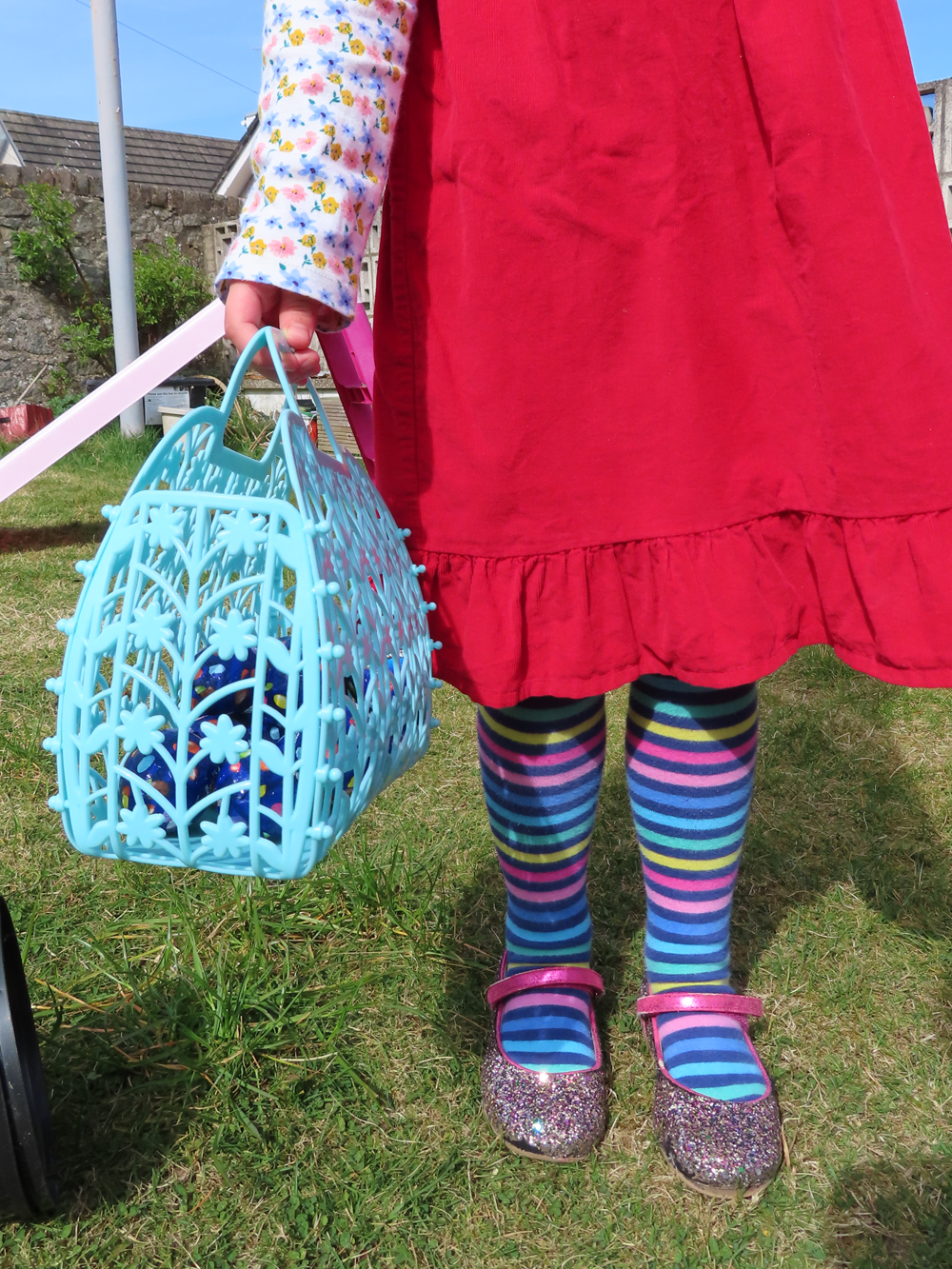 I have attended two virtual book groups (still fun even without the pub's halloumi fries). There have been chaotic video chats with the kids' friends (those of them who can face it, which is not very many). We did an egg hunt in the garden at Easter. We have walks around the block, counting rainbows, dropping off drawings, meeting local cats; my five year old is now able to walk by the river with me and climb big rocks when her sister stays at home. My step-sister had a baby. We have baked. We have painted. We have glued. People we care about have had Covid-19, but all had mild doses. People we love are sick in other ways, and we can't be there to help. We send letters and parcels; we have convinced all of the grandparents to set themselves up with webcams. We have attended online toddler groups and my five year old's usual gymnastics class hits the internet next week. 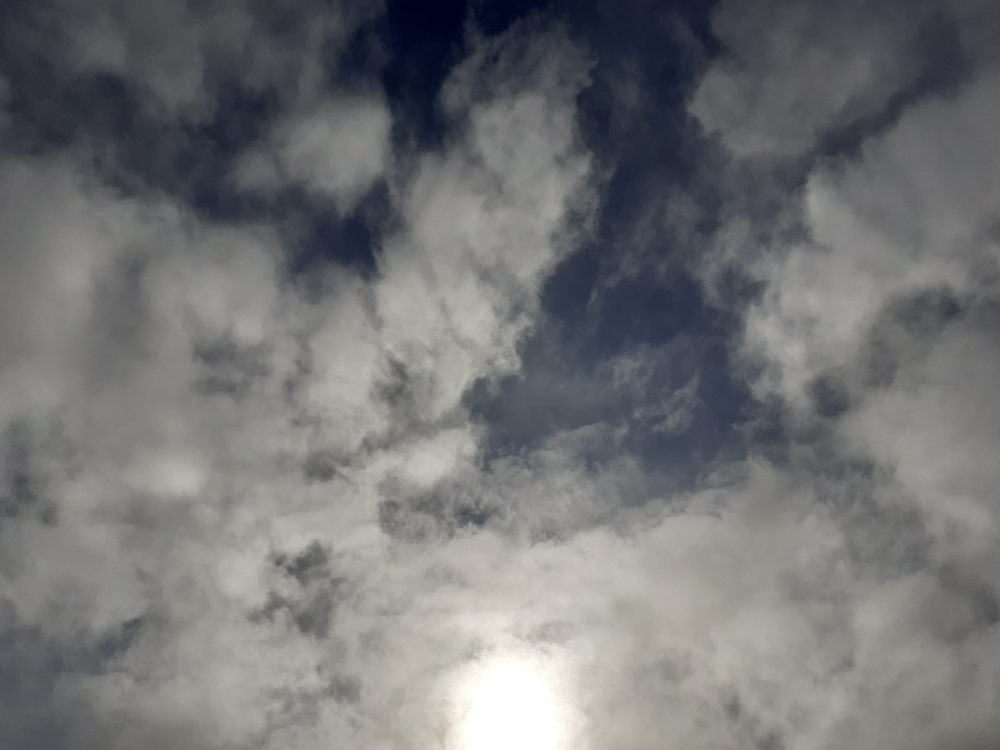 My five year old misses her friends and the routine of going to nursery. My two year old misses buses, reeling off her favourite (often non-existent) route numbers. I miss the freedom to leave the house, sit on benches, lounge on sofas while my children play with somebody else's children, go to cafes with my friends. I miss visits from my mum, when she would entertain the kids and pay for all the pizza. I convince myself far too many things are "essential items" and order them online - I feel relieved when they come by courier because I don't want our postie to judge me. 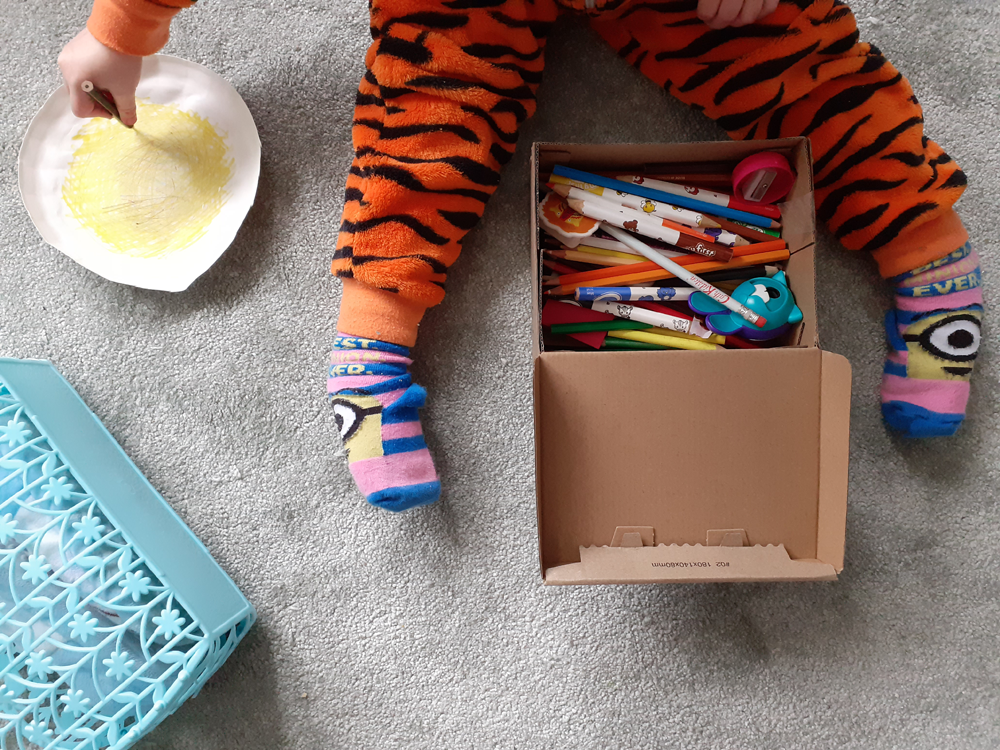 But I've also watched the kids' relationship bloom. They play better and longer together than ever before. They play better and longer without me than ever before. It has reminded me of the way my sister and I would bond during seemingly endless summer holidays, cut off from our routine and our friends.
Steve and I feel closer, too, not having to deal with the stresses of his lengthy commute, there for each other - literally, physically there for each other - when the days are feeling tough. We curl closer on the couch when the kids have gone to bed. 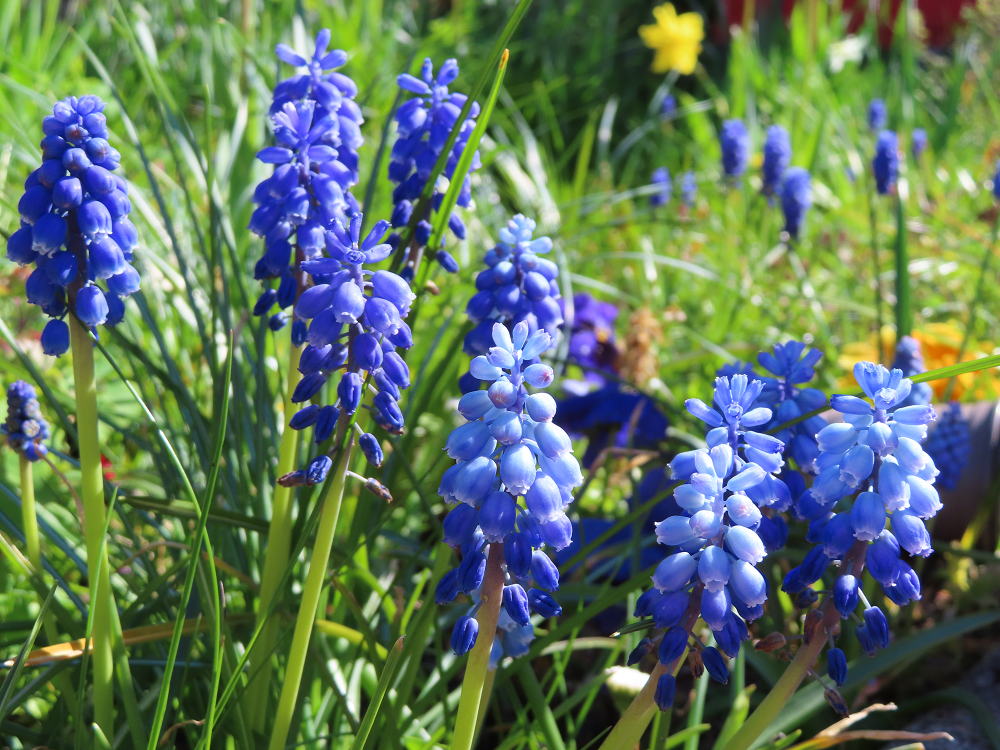 There have been points in my life when this would have been so much tougher. What if this had happened when I lived alone in a tiny bedsit, no phone, no internet, and unable to keep working in a cinema? What if this had happened when I was homeless, sleeping on my ex's sofa, waiting for a job and/or a council flat? Or when I had neighbours who were not just loud but dangerous? This would have been unbearable. I know there are people for whom it is unbearable right now. 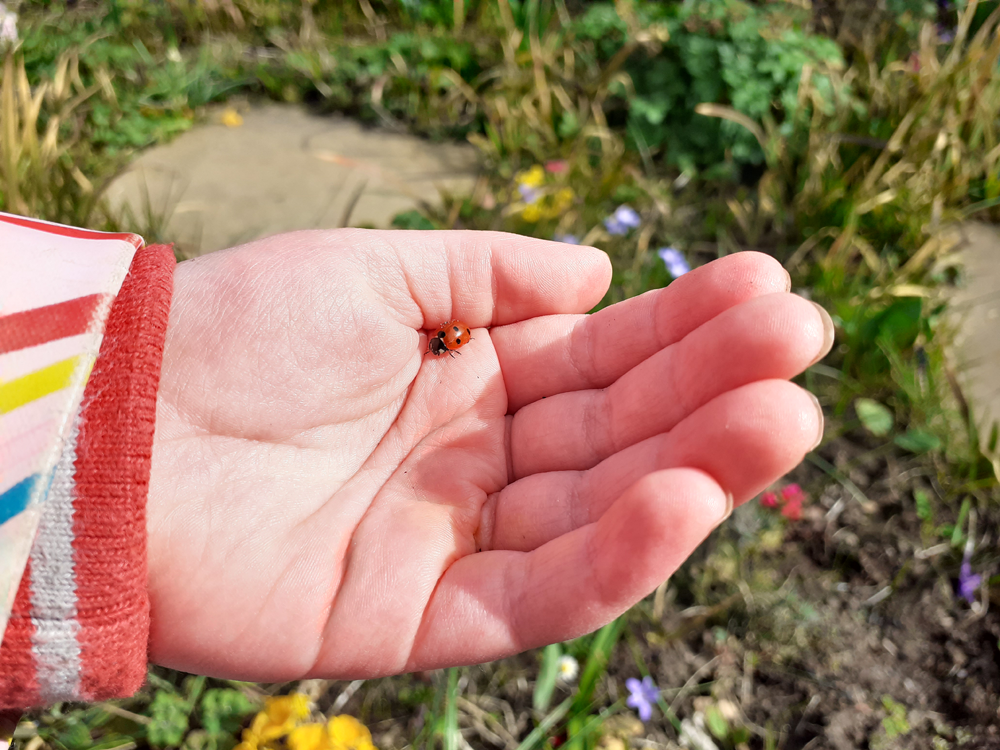 So, I'm trying to focus on the positives. I'm writing lists of things the kids and I can do together. I'm arranging video chats with friends (because these days a ten minute conversation has to be booked in advance). I'm taking lots of photos. And I'm coming back to my blog - I stopped when this started; I switched all the posts to private; it felt frivolous to chat into the internet; but it's a calming thing, recording my life right here. Instagram has been a safe place throughout this and my blog does a similar job. 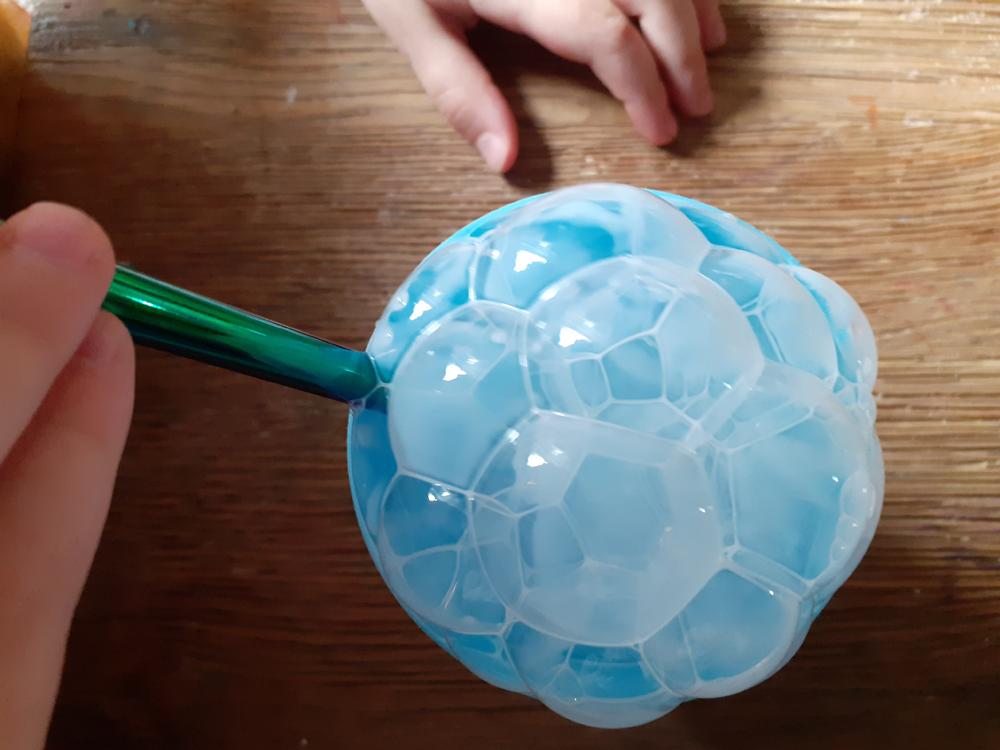 How have the past two months been for you? Tell me what's hard and what's good.
Email Post
Labels: Covid life one month