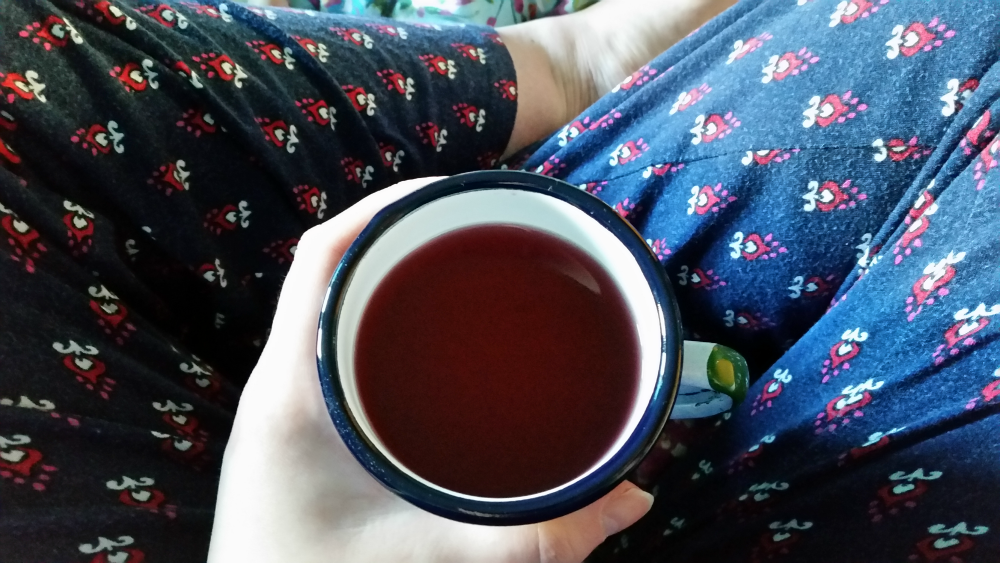 It's 8pm and all is quiet. Everyone is fed; nothing needs done which can't wait until the morning; both children are asleep. This doesn't happen every night, but we're closer to it now than we were ten weeks ago, in the earliest days of AS.
​​
We've been lucky so far: AS is a good sleeper and has (mostly - not always) been happy to kip in her crib at night and nap there through the day. Not so much in the evenings, though. In the evenings, she has needed held. Which has meant no pottering around on the internet or catching up on housework or having grown up meals together, just Steve and me.

But we seem to be through that stage [for] now.

I found that phase quite hard, first time around. Rationally, I knew that I wouldn't be holding my twenty-three year old daughter to sleep every evening, but I didn't know how long the stage would last. Was this my life for the next year? Three years? Seven years? Nine? Eating microwave meals one-handed and being scared to watch anything shouty or sweary on the telly? And was this something which MM would grow out of on her own or were the sleep trainers right? Should we be hurrying her towards independent sleeping somehow?

I remember, early on, seeing somebody on social media posting a photo of herself and her husband settling down to watch TV, wine glasses in hand, on the night of their daughter's first birthday. And I couldn't imagine it. How could they possibly be free of sleeping infant? And managing alcohol, no less!

But at some point - I can't remember exactly when - MM started sleeping in her crib. Well before her first birthday, Steve and I had caught up on Game of Thrones.

It's been easier to deal with this time around, though.

For a start, I don't begrudge AS the one-on-one attention; poor second child, she doesn't get the full days of cuddles her big sister enjoyed. If she's awake in the evening - and it's my turn to be awake with her - we sit in the dimly lit bedroom, smiling at each other, sticking our tongues out at each other, touching hands, AS saying what Steve and I are convinced is "Hiya" and "Hello", and me wittering on about what we did that day.

If it's not my turn to be awake with her, I often go to bed early. I don't mind the 9pm bedtimes; I know they're not forever and I know that parenting two children is easier, the more sleep that I get.

And sometimes she's asleep in the evening. We change both kids into their pyjamas in MM;s bedroom; we read them two stories; MM falls asleep and sometimes - sometimes - AS does, too. Sometimes we put her down in her crib and she stays there, sleeping soundly, by herself.

Steve and I have a free evening.

This is the first time I've bothered to come online, though. I've come online to talk about how nice it has been, not being online. The irony is not lost me.

Because it has been nice.

Steve and I have talked so much more, whispering together in our darkened room. We have sat side by side, reading books on back-lit Kindles, like some modern day Nora Ephron movie (but without any bickering about bedside lights). We have eaten microwave crumbles and even enjoyed a glass of wine (one glass of wine. In almost eleven weeks).

And I've been surprised to find that, after the first few weeks, after the habit was broken, I didn't miss the internet. I've barely been onto Twitter or Facebook; I've removed all but my absolute favourite blogs from my reader; I've not felt much inclination to share my own stories on here. I'm still hooked on Instagram - it's my destressor, scrolled surreptitiously in the kitchen when the children aren't watching - but the rest has lost its appeal.

I'm not done with it completely, of course. I'm still reading a handful of blogs; I'll still be popping by and writing my own now and then; I still appreciate all of the friendships I've made on the internet.

But I do prefer my evenings now, reading and chatting and paying some attention to the cats.